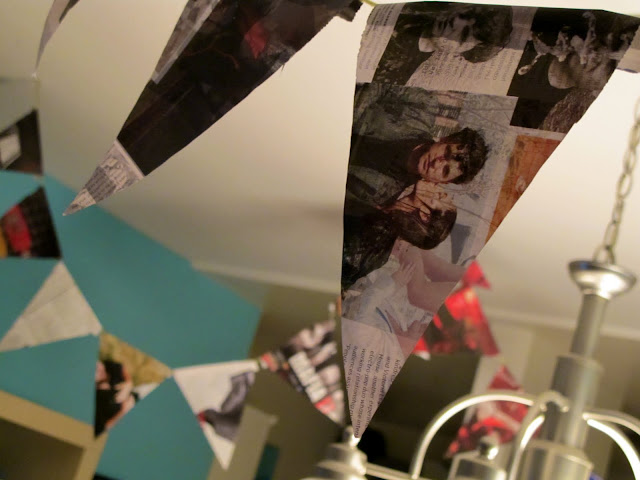 Today is my anniversary and as I was busy buzzing around the kitchen getting dinner ready, my kids suddenly said... "mom, if it's a party, we need decorations"... so, I thought, what can I do in five minutes?  I've been admiring the recent trend of party buntings that I've seen all over and I have been meaning to make some myself, so with five minutes to spare before my husband walked in the door I made my quick version of a party banner with the kids.

First, I grabbed an old magazine out of the recycling bin.  I happened to pick SPIN because I thought it might have some interesting photos, but anything will do.  I put the magazine flat on a cutting board.

I started about four inches down and one inch in from the spine edge of the magazine and made a diagonal cut with an exacto knife towards the center of the page edges.  This would form one side of the triangle for the bunting.  I pressed hard to cut through as many pages as possible.

Then, starting again on the spine side about four inches up from the bottom, I made another diagonal cut ending just past the first cut.  This formed the triangle for the bunting with all of the pieces held conveniently together by the spine of the magazine.

I continued to peel back the cut edges and make more diagonal cuts along the same lines until I had cut through the entire magazine.  You might not need a whole magazine.  It depends on how long the banner you are making is going to be.

When I was finished cutting.  I cleaned up the top edges with scissors.  At this stage you are left with basically a triangle shaped magazine!

I took some yarn and placed it flat on my work table.  I peeled off a page at a time and put a long piece of double-sided tape along the top edge of the triangle.  I folded the top edge down over the yarn so that it could hang down.  We had an assembly line going for this part.  My five year old was ripping off the pages, I was putting the tape on each piece, and my ten year old was folding the paper onto the yarn.  In literally five minutes we had yards of bunting completed.

I hung it around the dining room with thumbtacks and I have to say it looks fantastic.  The kids were right.  It's not a party without decorations!
Posted by Eden Folwell at 11:02 PM